The section of road near Smith Sims Road has been closed before because of flooding, but this time Jefferson County Commissioner Joe Knight said concrete barriers are being placed.

“Once it goes, it goes, and it will take everything with it,” Knight said. 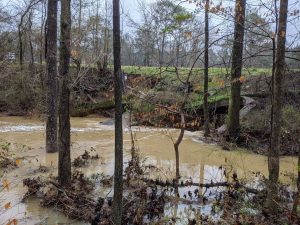 The closure is between Bishop Lane and Saddle Trail and it’s approximately three miles from Roper Road. Knight said a damaged culvert is causing a dangerous situation and he asks all drivers to avoid the area.

The county is working to build new culverts over Stinking Creek, but due to the recent rainfall, two large pipes that funnel water from the creek were separated from the concrete holding them. That caused the water to overflow and rainwater washed out the bank.